"Done right, on time,
every time!"

(Applies to diesel fuel as well as home heating oil)

Dealing with contaminated or degraded fuels and storage tanks 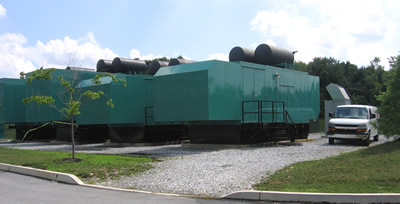 In the past in order to deal with contaminated fuel, service companies would hire a waste oil company to come to the site along with the fuel delivery company. The tank is drained of the old fuel, then new fuel is added to the empty tank to stir up the sediment and then the fuel is pumped out. Then refill the entire tank with new fuel. (This wastes all the fuel that was in the tank as well as the new fuel put in the tank to flush the tank.) This was and is still a popular way to deal with degraded/contaminated fuel and fuel tanks. Some tanks have manway access allowing workers to physically enter the tank to clean it, expensive and un-necessary. Also many times the same fuel is returned to the tank and if not properly polished during this process fuel being returned to the tank will simply recontamination the tank. Many storage tanks have no manway access in fact they have limited access, therefore utilizing fuel polishing by an experienced reputable company that specializes in dealing with fuel oil and tank issues.

Below is an example of what the cost of replacing the fuel might cost:
(This wastes all the fuel that was in the tank as well as the new fuel put in the tank to flush For example: If you have a 7000 gallon fuel tank. Waste removal @ .15 per gal* = $1,050.00 (low estimated cost)

Fresh fuel to refill the tank @ 3.50 per gallon, an estimated quantity of fuel for a 7000 gallon = $24,500.00 Plus the tank either needs to be cleaned or flushed with a cleaning agent or fresh fuel that would also have to be disposed of, adding additional cost.

A few things to keep in mind

We have many articles available about on the harmful effects of contaminated and derogated fuel on storage tanks, day tanks and fuel systems. Have questions about your fuel? Give us a call. 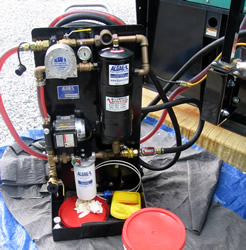 In Phase One, bulk water and sludge are removed from the tank into a separate container for disposal. In Phase One the fuel bypasses the filter. The Separator/Coalescer and Algae-X Fuel Conditioner work in conjunction removing free water, sludge, and particulate, as small as 5 micron, from the tank. The system is not in a re-circulating mode. The fuel enters through Port 1 and exits through Port 2 into a separate waste container. Water and sludge are directly removed from the tank and collected in an appropriate container for disposal.

In Phase Two, the MTC system is in recirculating mode, continuously restoring, reconditioning and returning the fuel back to the tank. Phase Two will continuously remove free water and particles as small as 5 micron using only the water separator and Algae-X Fuel Conditioner. The fuel enters in Port 1 and returns back to the tank from Port 2. The fuel bypasses the filter, which will economize on consumable filter elements. Phase two will restore the fuel to a clear and bright condition.

In Phase Three, the MTC system is still in a recirculating mode. The fuel enters through Port 1 and exits through Port 3 back to the tank. In addition to the water separator and Algae-X Fuel Conditioner, this phase incorporates the water block/fine filter removing even invisible particles down to 3 micron, as well as entrained and emulsified water. Phase Three will restore the fuel to its optimal clear and bright condition.